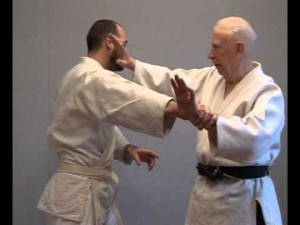 The BAB has been advised by James Wyatt on the 12 April 2018 the following.

I thought you and your fellow members would like to know John Cornish has passed away.

John Cornish started his martial art journey with judo and was taught by Trevor Leggett (taught by Yukio Tani) at the Budokwai in the early 1950’s. He then left to study in Japan in 1958 at the Kodokan and with his good technique he was given special training as a Kenshusei and was taught by some of the judo greats. He arrived at the Hombu dojo to study aikido under O’Sensei at the same time as Chiba Sensei and he took early morning practice with Osawa Sensei (he was used as uke, due to his skill at breakfalls) and also studied under Waka Sensei and Tohei Sensei, as well as O’Sensei (he described his technique as being ‘electric’). His first few black belts were awarded by O’Sensei and he returned to the Budokwai and London to teach both judo kata and aikido in the mid 1960s (he was one of the very few westerners to be licensed to teach and examine in all the judo katas and he even demonstrated the judo kata at the Olympics with Donn Draeger). With permission from the Kodokan he published a book on the Goshin Jutsu no Kata and continued to study, practice and teach both aikido (he was a good friend of Tamura Sensei) and judo. For over 40 years students benefited from his wisdom, patience and powerful technique, as well as his sense of humour at the Budokwai in London.

Some of my favourite comments from John were:
If a train is coming what do you do…get out of the way
If you have two legs move two legs and if you have three move three
You can never be low enough

He will be sorely missed by his family, friends and students.

My early martial career meant that training in London you had to be at the Budokwai. Originally I went as a Judoka but after seeing John Cornish I also trained at his Aikido class. He complained constantly that I trained with him because I was injured from Brian Jacks Judo class. The truth was I enjoyed both Arts and had found coaches that knew how to deliver the knowledge, Also I hurt much more after Johns Aikido class!