Gozo Shioda, Vice President of the International Martial Arts Federation, outstanding martial artist, author, teacher and Founder of the Yoshinkan school of Aikido, died in Tokyo, Sunday 17th July 1994, after a protracted illness. He was 78 and is survived by his wife, Nobuko and three sons, Tetsutaro, Takahisa and Yasuhisa. His autobiography published in 1985 summarized his outlook in its title, Aikido Jinsei – “Aikido is My Life”, as Shioda dedicated his life to studying, mastering and transmitting the Aikido he learned from the modern art’s founder, Morihei Ueshiba.

Gozo Shioda was born in Shinjuku, Tokyo in 1915. His father Seiichi Shioda, was a prominent paediatrician and medical academic who, having a penchant for the martial arts, had constructed a dojo, known as the Yoshinkan, at his home in Yotsuya, Tokyo. Various teachers were invited to demonstrate and instruct there and the young Gozo was soon taken with the prowess of the newly emerging judo. He enthusiasticly began to practice, showing the determination and abundance of energy that were to characterize his entire approach to life. He was naturally talented and made rapid progress, quickly advancing to third dan, while in his early teens liked nothing so much as to challenge police judo teachers to test his technique and push himself to the limit.

A turning point in his life came at the age of seventeen, when his father sent him to watch a class led by Morihei Ueshiba, whose dojo, the Kobukan, was located a couple of miles away at Ushigome. Ueshiba’s school was then somewhat exclusive and was said to offer a powerful martial art to those who could provide suitable guarantors of good character and stand the disciplined atmosphere. 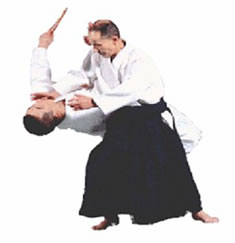 On his initial visit, watching Ueshiba throw his opponents about so easily and without any apparent effort, Shioda felt sure he was witnessing a fraud, but was invited to try his judo skills against Ueshiba to see for himself. On launching an attack he found himself flying through the air, hitting the ground head first, without understanding what had happened. He was immediately convinced that this was the real thing and the very next day, the 24th May 1932, joined the Kobukan Dojo and commenced his Aikido career as an uchi-deshi or “resident disciple”. Shioda trained with Morihei Ueshiba until 1941, when he also graduated from Takushoku University and at the end of the year married Nobuko. He spent the war in an administrative support capacity in China, Taiwan, Celebes and Borneo, eventually returning to Japan in May, 1946. After a brief period at Iwama, Ueshiba’s country residence, dojo and farm, to revive his strength after wartime privations, he returned to Tokyo and worked for the Nihon Kokan Steel Company. His involvement with this company let to an invitation to teach Aikido to its employees commencing in 1952.

Following the lifting of the ban on the practice of martial arts which had been imposed by the MacArthur government, the Nippon Sogo Budo Yaitai, or Life Extension Association, sponsored the first post-war demonstration of Aikido in 1954. Shioda participated and was awarded the grand prize for the best performance, in front of an audience of fifteen thousand spectators.

He also attracted the attention of a number of prominent businessmen who got together and proposed that he establish his own dojo. In this way the Yoshinkan, named after his father’s dojo and with its first location in Yoyogi Hachiman, was born.

Since his early judo experiences Gozo Shioda maintained frequent contact with police martial arts instructors. During the 1950’s he travelled all over Japan demonstrating the effectiveness of his Aikido to local police forces.

This gradually lead to a number of police Aikido courses, culminating in the compulsory Yoshinkan Aikido training of the Tokyo Metropolitan Women’s Police Force and the annual training of an elite group of Kidotai or “Riot Police” to become Aikido instructors at the Yoshinkan Headquarters dojo. In 1990 Gozo Shioda launched another course, this time for Yoshinkan Aikido practitioners from around the world seeking to become instructors. Shioda’s complete mastery of Aikido was confirmed in 1961 when Morihei Ueshiba awarded him the degree of ninth dan for his outstanding contribution to the promotion of Japanese martial arts in general and Aikido in particular was further acknowledged by the honorary award of tenth dan by the International Martial Arts Federation in 1984, along with the title Meijin or Grand Master.

During the many years since it was established, the Yoshinkan has expanded all over Japan, in the Americas, Europe, Australia, New Zealand and South East Asia. The reputation of Gozo Shioda, described by Black Belt magazine as “Aikido’s Little Giant”, attracted a long line of distinguished visitors to his dojo, all eager to observe the diminutive Shioda subdue opponents a third of his age and in some cases more than twice his weight. Members of the Japanese and the British Royal families, including the Crown Prince Hironomiya, observed Shioda demonstrating as did Robert Kennedy in 1962. Towards the end of his life, Gozo Shioda travelled widely overseas to practically demonstrate his vision of Aikido as a means to promote meaningful interaction between cultures. In 1990, he established the International Yoshinkan Aikido Federation to follow up on this and to co-ordinate the extraordinary growth in interest worldwide in Yoshinkan Aikido. He was convinced that through the silent language of Aikido, all differences between peoples, between cultures, disappear, rendering peace and harmonious co-existence a reality rather than a pipe dream.